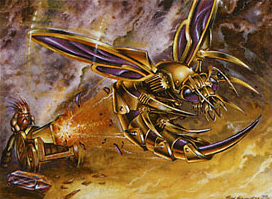 Have you ever been to a picnic where everyone freaks out when a bee buzzes by? Wouldn't it bee great if you could take that primal reaction and channel it for your own purposes?

As it turns out, quite a few writers have had just that thought. Enter the Bee Bee Gun — the weaponization of flying, stinging insects. Bees tend to bee effective weapons of terror for a number of reasons — they're too small to shoot or stab, they always seem to come in swarms that can cover every inch of a person, they're difficult to outrun or outmaneuver, and they make that terrifying buzzing noise. Unlike honeybees and some others in the real world, these ones don't seem to die after the first sting. And god help you if you're allergic. ("Your insides will boil out of your eye sockets like a science-fair volcano!") And if you're not, well, beeing stung to death by thousands of bees would bee a rather slow and unpleasant way to go.

In Real Life, of course, a foraging bee isn't likely to sting you unless you handle it roughly, or it perceives you as a threat to the hive. Honeybees die when they sting mammals (the workers, that is — drones cannot sting at all) beecause their stingers are barbed, so when they attempt to pull it out, they wind up wrenching it out along with a portion of their intestines; as a consequence, they're not likely to do it unless they think it's really damn important. (Most wasps such as yellowjackets, and relatively solitary bees such as bumblebees, on the other hand, have smooth stingers that enable them to be pulled out of whomever they sting, and they take malicious glee in reminding everyone of this fact.)

A stinging bee (or a crushed bee) releases attack pheromones that attract and rile up more bees. The pheromone sticks around and does not wash off quickly. Water is not an ideal deterrent — bees will sting whatever parts are above the water, and come after you when you get out. Bee venom is designed to make you think you've been hurt badly, and enough of it causes your throat to swell so that you asphyxiate. The sensation is not unlike that of beeing stung by ants or nettles, as all three use a venom cocktail that includes formic acid.

Ironically, a true swarm of non-Africanized bees is not particularly hostile, since they do not have a hive to defend; some people swear by bee venom therapy for arthritis, etc.; and when bee workers kill their queen they do so not by stinging, but by balling up around her and vibrating their muscles until the heat kills hernote which is also how Japanese honeybees defend their hives from Asian giant hornets. Mmmm... popcorn.

The Bee Bee Gun comes a few varieties, such as:

A subtrope of Living Weapon — specifically Attack Animal, if the bees are actually trained for combat purposes. If the bees are being shot like bullets from a gun, it overlaps with Abnormal Ammo. Often hits Somewhere, an Entomologist Is Crying, because real bees often do not work that way.

Note that beeing able to control all kinds of insects is a semi-common Stock Superpower, but bees, specifically, just seem to bee the go-to insect for this kind of thing, though wasps are also popular. Must be that whole Hive Mind idea. Or maybe it's because "bees" just sounds funny. Or it may bee that they're one of the more terrifying insects one may see on a regular basis.

For instances where the attacking bees/wasps/assorted stinging insects are not under someone's control, see Bee Afraid.