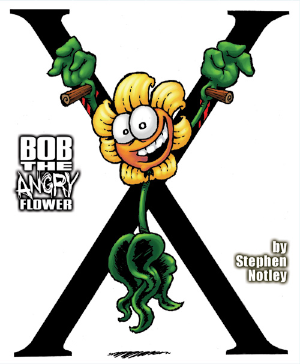 is a surreal webcomic by Stephen Notley, updated every Monday.
Advertisement:

The titular Bob is a 5-foot-tall anthropomorphic flower (a "daisy-dandelion-sunflower crossbreed, the kind that walks and talks", according to Notley) who frequently dabbles in mad science, actual science, robots, genocide, traveling through time and space, with a tendency to rant at anyone about anything, or just pull whatever crazy compulsive scheme he can think of. Accompanying Bob is Straight Man Stumpy, a walking, talking stump who often serves as the voice of reason against Bob's insane antics, though is often ignored or even roped into Bob's schemes. Also with them is Freddie the Flying Fetus, a talking, floating fetus whose child-like innocence often gets him into trouble, usually by Bob.

The comics themselves are mostly black-and-white one-shot comics, very few of which have overlapping plots. The humor is very random and chaotic with loads of non-sequiturs, with the punchline often being that there is no punchline.