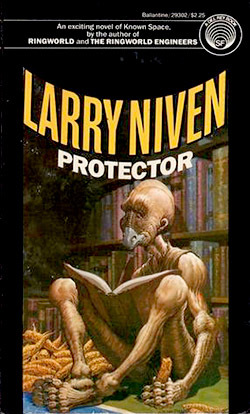 It introduces one of the most important but rarely seen races in the Known Space series: the Pak, who are distant ancestors of humanity, as well as the creators of the Ringworld. The first half of the novel deals with a badly botched First Contact, and the second with the adventures of the titular Protector, the Super Strong, hyper-intelligent adult form of the Pak.

The first part of the novel is an expansion and partial re-write of the short story "The Adults" that was first published in 1967. The second part is a reworking of "Down in Flames", an un-used outline for a Beowulf Shaeffer story that would have served as a grand finale for Known Space and would have destroyed much of the setting. note Niven wrote Ringworld and decided he wasn't quite done with Known Space yet after all, so the second part of Protector is not as destructive to the setting as "Down in Flames" would have been.