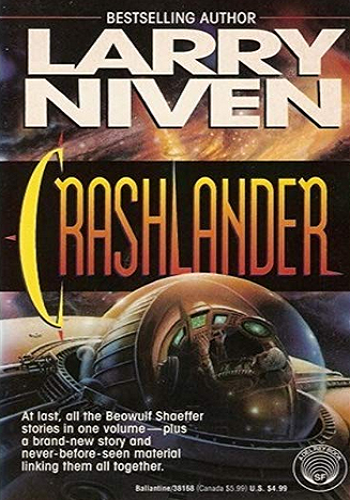 Crashlander is a 1994 fix-up novel written by Larry Niven. This novel takes place in the setting Known Space. On an interesting side note, the title is used in-universe to refer to humans born on the planet We Made It.
Advertisement:

The stories are linked, and some of them extended, by a framing story titled "Ghost". This story recounts Shaeffer's reunion with a ghostwriter whom Shaeffer had used to write about his adventures at the neutron star and at the core, Anders Smittarasheed. Anders, working for ARM agent Sigmund Ausfaller, has come to question him about his dealings with Pierson's Puppeteers, General Products and Carlos Wu, as well as what happened to Wu and ARM agent Feather Filip. Wu, Shaeffer and Sharrol Janss and their children, Tanya and Louis Wu, had secretly emigrated from Earth to the planet Fafnir to escape the control of Earth's United Nations government and the ARM.