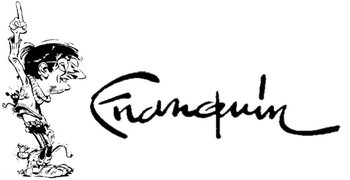 André Franquin (3 January 1924 – 5 January 1997) was one of the best-known figures of the Franco-Belgian school of comic books. He is mostly famous for his work on Spirou and Fantasio and his own creation, Gaston Lagaffe, whose title character is the archetype of the slacker Anti-Hero. He was a key member of the "Marcinelle school", which, unlike the ligne claire school popularized by Tintin creator Hergé, emphasized dynamic movement and more cartoonishly exaggerated physical features.

Born in Etterbeek, Belgium (coincidentally Hergé's hometown), Franquin discovered early in life a passion for cartoons, and his first works were published by a daily newspaper when he was barely 11. After studying at Saint-Luc, a school of religious art, he was noticed by an alumnus, who hired him as a collaborator on animated features. The end of World War II and the arrival of American-style animated cartoons proved overwhelming for the small studio, but the experience was a formative one for Franquin, who became acquainted with two fellow employees, Morris (who went on to create Lucky Luke) and Peyo (who went on to create Johan and Peewit and eventually The Smurfs).

In 1946, Franquin started working for the illustrated weekly Le Moustique, and Jijé took him on as a collaborator and then his successor on Spirou and Fantasio. Although the series had already passed through the hands of two illustrators, Rob-Vel and Jijé himself, it was with Franquin that it reached its full potential, and many fans are unaware to this day that Franquin was not, in fact, the creator of the series. He introduced most of the key recurring characters, such as the Count of Champignac, Zorglub and, most famously, the Marsupilami.

Franquin created other series during that period, notably Modeste et Ponpon and Le Petit Noël. But Franquin's most famous and well-liked creation, Gaston Lagaffe, began, ironically enough, as a throwaway character invented to fill in empty spaces in the pages of the illustrated weekly Spirou. One-panel gags evolved into short strips, and Gaston then became a supporting character in Spirou and Fantasio, before acquiring his own series. From 1968 Franquin abandoned Spirou and Fantasio altogether and focused on Gaston Lagaffe, whom he infused with some of his own personality traits, especially an instinctive distrust of any form of authority.

Strangely for someone with such a keen sense of humor (or perhaps not), Franquin struggled with recurring bouts of clinical depression, a trait he expressed through another series titled Idées Noires.

He entered a period of semi-retirement in the 1980s after a particularly severe nervous breakdown, although he continued working on Gaston Lagaffe and other illustrative projects right until his passing from a heart attack two days after his 73th birthday in 1997.