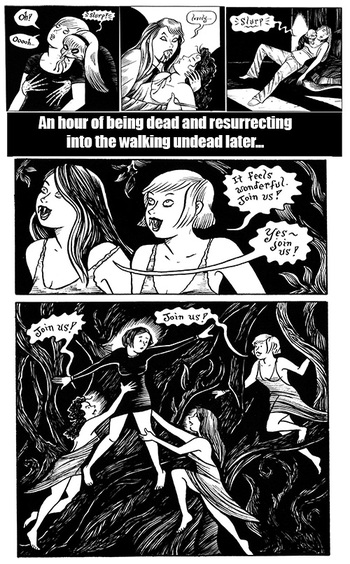 Hey, they may be hapless victims turned bloodlusting walking corpses, but living forever in eternal beauty is a great health benefit!
"But in general, take my advice, when you meet anything that's going to be Human and isn't yet, or used to be Human once and isn't now, or ought to be Human and isn't, you keep your eyes on it and feel for your hatchet."
— The Lion, the Witch, and the Wardrobe

Part of the Horror of being infected by The Virus is its ability to corrupt the mind of a victim, subordinating them into a Hive Mind or outright making them a sociopathic shell of their former self, intent only on killing or infecting their former loved ones.

But then there's times that a transformation doesn't brainwash, de-soul, drive insane, or demonically possess the victim. Other times the Viral Transformation causes changes that are purely cosmetic, granting amazing abilities albeit at great cost and (usually) a horrifying appearance. So what do these unwilling tranformees do? Become Phlebotinum Rebels or Vampire Refugees and use their powers to fight these monsters? Nope. They engage in Transhuman Treachery.

They sell out humanity and ally with who- or what-ever did this to them, regardless of whether or not they wanted to kill all vampires, robots, mutants, or aliens five minutes ago. There is no shock, only joy at becoming "more" than human and being able to flout society's rules.

If this Face–Heel Turn is too quick, it gives the impression that some other trope is at work, like The Dark Side, or With Great Power Comes Great Insanity. However, this trope may be justified a couple of ways. If The Mind Is a Plaything of the Body it doesn't matter that vampire Dan doesn't want to drink human blood, he has to, and trying to be friendly won't last. Alternately, someone seeking the Curse That Cures may make the painful choice to switch sides to save their life. If the setting has an ongoing "race war" against what the character has become if they don't join their new race they'll quickly face death. However, most of the time the switch in alliances comes about with alarming speed and lack of concern. At best you'll see these Big Bad Friends offer the transformation to a friend or loved one... and kill them if they refuse. The Dark Side, they have cookies. The justification may be simply that vampires, etc., are Always Chaotic Evil, though many people don't see the concept of Always Chaotic Evil itself as justifying things because they think it's unrealistic or a lazy way to characterize evil vampires.

It seems resisting these new biological impulses or avoiding becoming drunk on power is reserved solely for protagonists with Heroic Willpower.

A possible cause of Beware the Superman, this is the third sin in the Scale of Scientific Sins. Compare Sheep in Wolf's Clothing and Species Loyalty. Contrast Monsters Anonymous. May lead to forming an Anti-Human Alliance. Can overlap with Super Supremacist. Contrast Pro-Human Transhuman or Humanity Is Infectious, depending on the details. See Stages of Monster Grief for additional psychological attitudes about human grief without the human.

Scene from the 1972 film, Blacula. A photographer girl takes a picture at a club Blacula was in. Blacula, knowing as a vampire, that would reveal his undead nature, quickly tracks her down and feeds on her to keep his secret. Not minutes after this happens, a local cop parks near her dwelling and sees her. He goes to help only to find she's feeling much "better".

Scene from the 1972 film, Blacula. A photographer girl takes a picture at a club Blacula was in. Blacula, knowing as a vampire, that would reveal his undead nature, quickly tracks her down and feeds on her to keep his secret. Not minutes after this happens, a local cop parks near her dwelling and sees her. He goes to help only to find she's feeling much "better".