This go-around is done in the style of Night Gallery with Bart hosting the in-betweens while babysitting Maggie as Marge goes to get gift-shop earrings, but not before telling Bart that this year's Halloween special may be too scary for some viewers.

The Devil and Homer Simpson 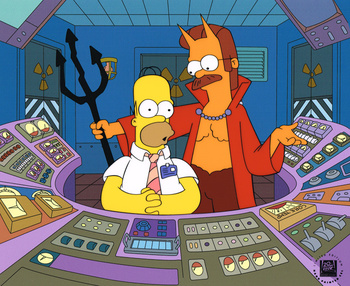 Homer dreams of being a fashion reporter at a doughnut modeling show while doing his rounds at his job, but finds that Carl and Lenny have already eaten all of the real donuts (and chucked the rest at an old mannote Grampa Simpson for fun). Desperate, he claims he'd sell his soul for a donut, and at that instant, the Devil (who surprisingly is Flanders) appears and offers to give him one. Homer signs a contract and is given a donut. But before he finishes it, he realizes that as long as he doesn't do so, the contract is voided. The Devil vows Homer will go to Hell sooner or later before disappearing.
Advertisement:

That night, a half-asleep Homer goes to grab a midnight snack and thoughtlessly eats the last piece of the donut; the Devil appears and starts to suck him into Hell. The family awakes in the commotion and Lisa begs the Devil for a fair trial; he grudgingly agrees to this but demands that Homer spend a day in Hell. Down below, Homer finds himself chopped into pieces and given an ironic punishment by being force-fed donuts (he manages to eat the whole supply, to the torture technician demon's confusion).

Meanwhile the family hires Lionel Hutz to represent him in the trial. Midnight comes and the Devil, along with The Grim Reaper as a judge, appears along with Homer (bound in a fire cage). The Devil and Hutz barter on specific terms before the trial begins: Hutz for bathroom breaks, the Devil on his pick of the jury, which turns out to include some of the worst people from history: Benedict Arnold, Lizzie Borden, Richard Nixon (who, at the time of the episode was still alive and only on the jury because of a Deal with the Devil), John Wilkes Booth, Blackbeard the Pirate, John Dillinger, and the starting line-up of the 1976 Philadelphia Flyers ("The Broad Street Bullies"). The trial doesn't go well — the Devil offers proof of his deal and Hutz ultimately excuses himself to go to the bathroom and flees out the window.

Just as it looks that Homer will be condemned to Hell, Marge comes in with a photo album and shows everyone their wedding photo (which was in an emergency room as Homer ate the wedding cake...before the wedding). On the back of the photo is a declaration Homer made pledging his soul to Marge. The jury agrees that Homer's soul belongs to her, and he's freed — but the Devil, sore at being cheated, turns his head into a donut. Now Homer can't resist munching on himself, and most of the town's cops are waiting outside with coffee cups... 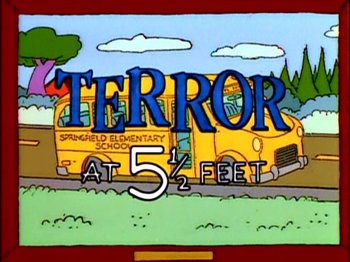 This story also begins with a nightmare as Bart dreams of his school bus losing control and being run over by a semi-truck. He awakens still a little shaken by it (not helped with Homer blowing a blow-horn that he stole from a marina in his ears). As Lisa and he head for the school bus in rainy weather, Bart finds that Skinner is onboard, a punishment from his mother. Halfway into the bus ride, they pick up Groundskeeper Willie who had gotten stranded after killing his mule. Soon, Bart notices a gremlin has attached itself to the side of the bus and is slowly picking it apart. He tries to warn the others but every time he does so, the gremlin hides. The first time, they just think he's crazy. The second time Otto assumes he's talking about Hans Moleman who was driving alongside them, so Otto knocks him off the road. Hans' car stops before it can hit a tree...then explodes anyway, because it's an AMC Gremlin.

Skinner tries to stop his paranoia by pulling the shade over the window but Bart can't help but peek and sees the gremlin only making matters worse. Skinner finally tackles Bart and ties him down with Willie's rope. Bart convinces his seat mate, Üter, to untie him and discovers the back tire will soon be loosened by the gremlin. Using the bus's emergency flares, Bart opens the window and manages to knock the gremlin off just as he's pulled back in by Skinner and Willie. The gremlin hits Ned Flanders's car; he stops and picks it up despite the gremlin trying to attack him...

The bus makes it safely to school (despite that it's completely wrecked — and for once, it wasn't Otto the bus driver's fault). Bart gleefully announces he was right, but Skinner nonetheless finds his actions deplorable and has him shipped off to the New Bedlam Home for the Emotionally Interesting (last seen on the season three premiere, "Stark Raving Dad"). Bart begins to relax, only to scream in terror when the gremlin shows up in the window of the truck, showing off the severed (and still talking!) head of Flanders.

The family watches a news report about a murder victim who was drained of his blood; a black cape was found at the scene. Despite the obvious evidence, Wiggum assumes it's the work of a mummy and has the Egyptian wing of the museum destroyed. Lisa knows they should be tracking down a vampire but Homer dismisses the theory. Also in the news: Mr. Burns just bought a blood bank!

Some time later, the family is traveling at night to Pennsylvania, where Burns has invited them to dinner. At the manor, there's even more obvious evidence of Burns being a vampire (i.e.: he mentions the family being "fresh victims of his ever-growing army of the undead" over the entrance's intercom, his shadow has a life of its own, the "punch" served is blood, etc.) but only Lisa notices. Lisa "accidentally" spills the "punch" on Bart and her and they head off to get cleaned up. As they head back they discover Burns' vampire lair (oddly easily accessible) and investigate. As Lisa looks through Burns' autobiography Yes I Am a Vampire, Burns' vampire minions rise and advance on the two. The kids flee but Bart stops when he sees a lever for a "Super Happy Fun Slide". Knowing it's a trap, Bart pulls it anyway and slides back down into the lair...where a group of vampires are waiting for him. A vampire woman pulls him off the slide and pins him down as the rest of the undead minions gather around him and bare their fangs menacingly. A bat soon flies in who morphs into Mr. Burns himself and Bart is presented to him to which Burns waste no time feeding on.

Lisa makes it back to the family and tries to tell them what happened, but then Burns, with very visible blood on his mouth, appears with a clearly bitten and pale-skinned Bart who drones that nothing happened which the family believes. That night at the Simpson home, Lisa is visited in her bedroom window by a now vampiric and evil Bart flanked by other kids he's bitten. He beckons her to join them but she refuses, so Bart crashes through the window and tries to turn her by force. The commotion attracts Homer as well as the rest of the family, who stops him from doing so. But Bart laughs evilly as he changes into a bat and flees into the night. Lisa tells her family that the only way to return Bart to normal is to kill the head vampire, Mr. Burns.

The family head back to Burns' castle and make their way to Burns' lair. Homer drives a stake through his heart (though not before accidentally hitting his crotch). Burns dies and all seems well...but the next morning at home Grandpa floats into the kitchen claiming to be a vampire. The rest of the family reveals to the shocked Lisa that they're all vampires, because Burns wasn't the head one — Marge is. The undead family bare their fangs to attack Lisa... before turning to audience and wishing everyone a Happy Halloween, in a closing shot that parodies A Charlie Brown Christmas.

The Devil and Homer Simpson

The Simpsons - Ep 86 [Treehouse of Horror IV (The Devil and Homer Simpson)]: Homer sells his soul for a donut and the only way to save him is to have a trial. Things look to be going badly until Marge reveals Homer pledge his soul to her. This cost the Devil his prize but he isn't one to lose gracefully which Homer finds out the hard way.

The Simpsons - Ep 86 [Treehouse of Horror IV (The Devil and Homer Simpson)]: Homer sells his soul for a donut and the only way to save him is to have a trial. Things look to be going badly until Marge reveals Homer pledge his soul to her. This cost the Devil his prize but he isn't one to lose gracefully which Homer finds out the hard way.