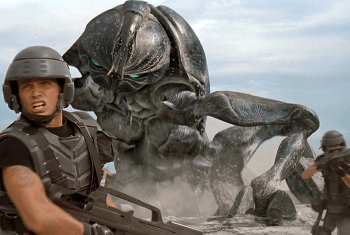 Game over, man, game over!
"We must meet the challenge with our valor, our blood, indeed with our very lives to ensure that human civilization, not insect dominates this galaxy now and always!"
— Sky Marshal Dienes, Starship Troopers
Advertisement:

Any war fought between humans and an insectoid race, or any other clearly inhuman enemies. Generally, the battle is at some point in The Future.

Bugs make great enemies for a fictional war for precisely the same reason that Evil Overlords give their minions face-concealing helmets: The reader or viewer is more likely to empathize with an enemy who has readable facial expressions. Making the enemy an insect or something similarly alien makes them impossible to read, which removes almost all empathy. Specifically insect-like monsters have the added benefit of triggering some fairly common phobias. Thus, the enemies can be demonized and painted as remorseless monsters with no sense of individuality, thereby assuaging the protagonist's (and hopefully the reader's) guilt over killing them.

Often, the bugs are a stand-in for whatever real-world enemy was current at the time of writing.

Can be a quite compelling scenario, as there seems to be something primal about a determined band of humans having to stand against a living ocean of chitinous, drooling, gribbly horrors, screeching and hissing as they advance in a nightmarish tide of fangs and claws. Expect the enemy to have an incredible numerical advantage that can be used in a Zerg Rush, making victory for the humans not a matter of defeating the aliens, but merely surviving. A Heroic Sacrifice or two usually comes into play if it means one of the good guys can take a load of beasties with him...and nuking the site from orbit may be the only real option. If worse comes to worst, it may be Better to Die than Be Killed, lest you end up with a Face Full of Alien Wing-Wong.

Compare Robot War, a closely related trope dealing with wars between humans and sentient machines. See also: Big Creepy-Crawlies, Starfish Aliens and Hive Caste System (which tends to be used by nearly all Bee People with another concept of role specialization which may make them a Keystone Army). Usually a Horde of Alien Locusts. Sometimes it's an insectoid Xenomorph Xerox. Commonly uses Guilt-Free Extermination War. May involve a Creature-Hunter Organization. Unrelated to Ant War, wars fought between actual insects. For a smaller-scale version, see Pest Episode.

Alternative Title(s): The War On Bugs