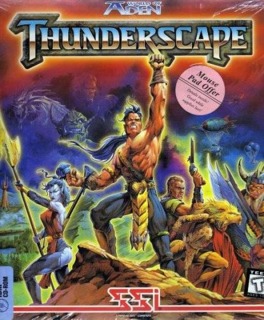 "The Age of Thunder has not ended."
"Aden will not slip quietly into the night."
Advertisement:

In the early 1990s game publisher SSI was churning up RPGs based on Advanced Dungeons & Dragons and was the leader in that area. But the ADnD license was going to expire and relations with its owner TSR were getting progressively sour. Something new was needed. Thus Thunderscape: the World of Aden was born.

Aden used to be a peaceful world where rulers were secretly guided toward bright future by a group of seers. Armies and weapons still existed, but large wars were a thing of the distant past. The discovery of a magic-boosting metal — manite — allowed a number of scientific breakthroughs and precipitated industrial revolution with magic and technology tied into a strange arcane art of mechamagic. In hindsight that was the golden age.

It all was changed one unremarkable day ten years ago. The sun was suddenly eclipsed by an unknown force. The darkness didn't last long, but in this short time nightmarish monsters — "nocturnals" — sprang from every shadow. Beasts long destroyed, terrors only imagined, and things no sane mind had ever contemplated all became real. Countless thousands were slaughtered and an untold number of villages and cities were burned. In hours Aden was plunged into chaos and anarchy. This event and the malevolent force behind it have been dubbed "Darkfall".

After a millennium of peace people were ill-prepared for this ruthless onslaught, and it seemed that mortals would perish without ever knowing the cause. But the people of Aden are hardier than that. With mechamagic, steam golem warriors and the many other strengths brought to bear by the nations of Aden, the world fights back against the Darkfall and its nocturnals.

Two computer games for MS-DOS, three novels and a D6/Masterbook tabletop role-playing game were released. By the time they were published SSI has already been bought by Mindscape. The new owner, allowed to finish the projects, but then cancelled everything. In 2012 the rights were acquired by Kyoudai Games

, which ran a successful Kickstarter campaign for a new tabletop RPG, this time a Pathfinder one. It has been released in 2014.

The video games were published in 1995 less than a month apart. They bore little semblance (other than mentioning Darkfall), were set on the opposite sides of the continent and featured unrelated plots. For years they stayed Abandonware, but were picked up by GOG.com in 2014. They are:

open/close all folders
Setting in general
The game "World of Aden: Thunderscape"
The game "Entomorph: Plague of the Darkfall"
The novel "Darkfall"