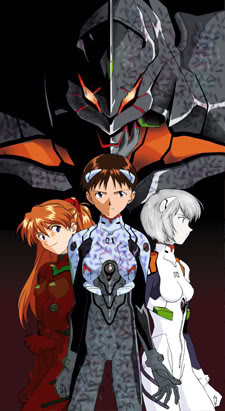 Asuka, Shinji, and Rei.
Now with even less sanity!
And thus it begins. The saving of the world.
— Gendo Ikari, Ashcroft Representative of Europe.
It seems that I'm suffering from conservation of psychological problems; by making Shinji more sane and balanced, I'm... negatively affecting THE WHOLE WORLD!
— EarthScorpion
Advertisement:

If that combination doesn't tell you the general feel and theme of the story, then nothing will.

There are the local Starfish Aliens, the Migou, who control the polar regions and are systematically trying to push humanity back down to the Stone Age. There is the Half-Human Hybrid cult of the Esoteric Order of Dagon who tirelessly search for the lost city of R'lyeh in order to awake Cthulhu. There are the Disciples of the Unnamable who are divided into the Diabolical Masterminds of the Death's Shadow who seek to corrupt humanity and the Omnicidal Maniacs of the Rapine Storm with the goal of wiping them out. Not to mention that the second largest Mega-Corp is controlled by Nyarlathotep. And that's just the default Cthulhu Tech setting. And on top of that, someone let Gendo Ikari into a senior position in the largest Mega-Corp (which, because it controls the Magitek on which the society is built, is basically a wing of the government), and strange beings designated as "Heralds" (and named after Canaanite deities) are attacking.

To describe it...well, you know how certain other Evangelion fan-fics head straight for blending Grimdark and Rule of Cool in a seamless mix which creates a valiant effort which goes beyond the impossible, kicks reason to the curb, and undoes the bleakness of Evangelion? Well, Aeon Natum Engel doesn't. It's cold, it's hard, and it's cynical. The "good guys" do monstrous things in the name of survival, the "bad guys" are very hard to tell from the "good guys", and the really bad guys are...well, really bad indeed. It's very well written, and stylish, in a dark, understated kind of way, and sometimes induces headaches from the sheer amount of elaborate plotting, but don't go into it thinking that it's necessarily light reading.

It may help to make notes... and to have the external memory device plugged in. Finally, as a result of author dissatisfaction with the fic after its finale, a rewritten version is underway, entitled Aeon Entelechy Evangelion.

See Neon Genesis Evangelion, CthulhuTech, and F.E.A.R. for other tropes which might appear.

How Boring.
— Nyarlathotep, The former CEO of the Chrysalis Corporation, the Soul of the Outer Gods, the Crawling Chaos, the Great Beast, Lord Entropy, the End of All Things, Master of Cessation, King of Oblivion, More Of A Dick Than Gendo, the Watcher in the Dark (Whatever the fuck he feels like).