You Cannot Grasp the True Form 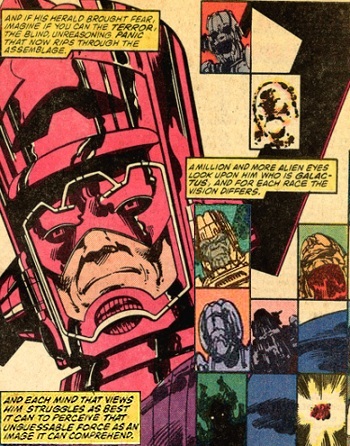 Apparently, a gigantic man in a purple suit and an oversized helmet is the most complicated form humanity can grasp.
"Words describing it fail. Pages relating it shrivel. Tales recounting it end."
— Nemesis of Reason

Imagine if some non-human entity, such as, let's say, TV Tropes, became a three-dimensional living entity with self-awareness and consciousness, that wanted to sit down and have a lovely little chat. What would it look like? Like a surprisingly feminine, charming little sprite named Trope-tan? Walls and walls of binary code that resolve themselves into a house-like shape? Or perhaps a whole universe, a world, complete in and of itself?

At some point in the conversation, the personification of TV Tropes drops a little Mind Screw in your tea: you are not looking at, or conversing with, all that TV Tropes is. You are not even seeing an illusion that TV Tropes is projecting into your mind. Rather, the sheer awesomeness of TV Tropes, the might and immense hideousness of it, or its life-ruining influence bypass your eyes and occipital lobe entirely, and your mind meekly registers it as the closest, safest, yet still comparable thing on hand.note For safety's sake, just say The Wiki Witch of the Web put a spell on you You Cannot Grasp The True Form, or else you will Go Mad from the Revelation. May overlap with Brown Note.

A practical application of Nothing Is Scarier. Related to These Are Things Man Was Not Meant to Know, and sometimes Alien Geometries. Often a property possessed by the Eldritch Abomination. If everyone who fails to grasp the True Form sees something different, it's an example of Appearance Is in the Eye of the Beholder.

When someone is in a truly outlandish environment, their brain will just make up stuff for them to see. Usually an excuse for the artist not to have to draw the weird other-dimensional stuff.

More possible in real life than you may think, just be prepared before clicking the real life folder open—you may leave with a headache.

See also A Form You Are Comfortable With, Ultimate Evil, Hyperspace Is a Scary Place, and Weirdness Censor. Not to be confused with You Can't Get Ye Flask.

JP makes his cosmic horror monsters so alien that they are indescribable so he wont have to write descriptive prose.

JP makes his cosmic horror monsters so alien that they are indescribable so he wont have to write descriptive prose.