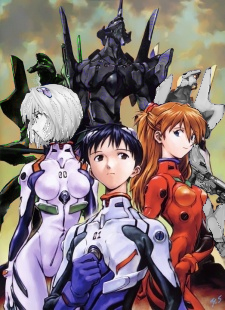 Rei, Shinji, and Asuka.
50% more snark
and 50% less sanity.
"It is time."
"Yes. It is time for Entelechy to begin."
— Aeon Entelechy Evangelion, Prologue: The Words That Began The End of Everything.
Advertisement:

Take the Cthulhu Mythos, as seen through the futuristic, Hopeless War lens of CthulhuTech. Add in the supernatural horror of the First Encounter Assault Recon series, as well as various bits and pieces (most of them nasty) from Eclipse Phase and Revelation Space. Now throw them all into a blender, and use the resulting nightmare of a setting to tell the already dark and apocalyptic story of Neon Genesis Evangelion.

This is Aeon Entelechy Evangelion

20 Minutes into the Future, mankind stumbles across knowledge of the Mythos, as the flaws in the old scientific models become evident. The scientific method is promptly applied, and things turn out pretty well, with sorcery-as-a-science and reactionless engines transforming all aspects of our culture. Sounds nice?

It is now 2091. Space is controlled by the Migou, who are trying to stomp mankind back into the Stone Age without waking up anything else that lives on Earth. The Esoteric Order of Dagon are trying to wake Cthulhu. A large percentage of Asia has become weirdly merged with Leng, where the Dead God, Hastur, resides, and there is a subtle war going between two sides of Humanoid Abominations and one side of inhuman fiends inside the territory controlled by the New Earth Government.

But, don't worry! Gendo Ikari, a senior figure in the Ashcroft Foundation (the world's largest Mega-Corp) will save us from the monstrous, god-like threats called Harbingers (named after Canaanite deities) which are attacking on top of all of this. Apparently, he has some kind of secret weapon.

This can only have a happy ending.

is a 2nd edition/sequel/rewrite of EarthScorpion's Aeon Natum Engel because ES ran out of ink... er, felt dissatisfied with the inconsistencies between the earlier and later chapters. As of September 7, 2012, a prologue and nineteen chapters have been published, currently in Book II. Naturally, so far it has turned out just as terrifying as Aeon Natum Engel.

Presently it is on hiatus in favor of other works, and EarthScorpion stated that he is so disgruntled towards Cthulhutech

that one of his backburner projects is to completely purge AEE of its distinctive Cthulhutech elements.

It has a Character Page that currently lists the differences between Canon EVA and AEE characters. It also has a Shout Out page.

I have a bad feeling about this...