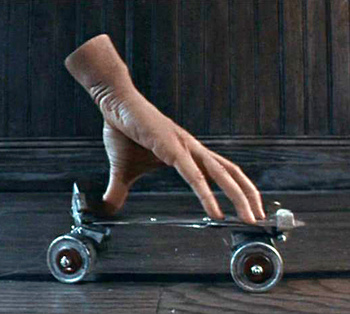 Did you just chop apart the evil zombie or robot you were fighting? Keep an eye on all the parts, because it's only a matter of time before that severed hand starts to spider-crawl after you, or scuttle off for some nefarious purpose.

With zombies and similar creatures, the ability for the hand to function independently is often a result of some sort of supernatural energy. With robots, it's usually a result of Easily Detachable Robot Parts.

See Evil Hand for when this happens before it gets lopped off. When its deliberately done during a fight, it's an example of Detachment Combat.

For other lopped off yet functional body parts see: Losing Your Head, Organ Autonomy, and Brain in a Jar.

Not to be confused with Handy Helper.

Note to editors: the examples are divided by type.