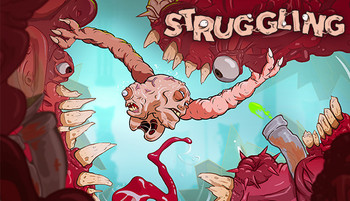 Get a grip.
Advertisement:

Imagine if Carrion, Happy Wheels and Heave Ho somehow had an inbred child together and then that inbred child had a baby with The Thing. You get Struggling, a challenging yet absurdly grotesque physics platform game published by Frontier Developments and developed by Montreal-based studio Chasing Rats Games, in which you assume the role of a monster attempting to fulfill an ancient prophecy. Key word... attempting.

Long ago, when the world was in peril and the future seemed hopeless and bleak, selfless saviors emerged from the shadows and instantly put a stop to all evil. Each and every one of them was defined by their uniquely abnormal appearances, and these unconventional guardians helped create a new golden age for humanity. However, a false prophet rose to power and drove the aberrations back into hiding. For years, these malformed monsters devoutly believed that a pair of great heroes, called Hector and Achilles, would come to save all of freak-kind when the time came, keeping their chin up even when dwelling in the darkness.

...It's just too bad these so-called "heroes" came a few centuries too late, taking the form of a conjoined genetic experiment possessing little else other than two floppy, flailing limbs. Breaking out of the laboratory in which it was born, this pitiful folly of modern science traverses deranged worlds to achieve its full potential.