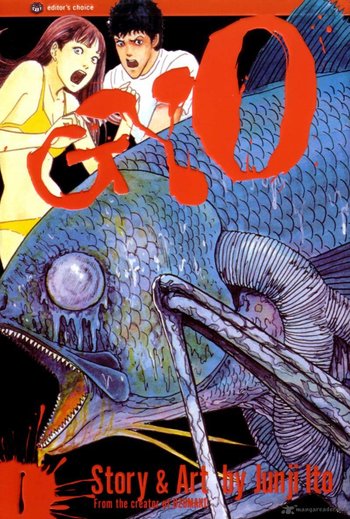 Gyo is a Seinen horror manga by Junji Ito, also known for creating Uzumaki and The Enigma of Amigara Fault (which, incidentally, is an extra story in the back of the second volume). It ran from 2001 to 2002.

During World War II, the Imperial Japanese Army commissioned a secret experiment to create biological weapons. The end result - a deadly bacteria that infected corpses and released nauseous gases, and a walking mechanism fueled by these gases, for the purpose of spreading infection. This plan was averted when the ship carrying the bio-weapon was sunk by American bombers during the war - but the bio-weapon remains active, infecting the sea life and spreading back into Japan in the form of what appears to be undead walking fish.

An animated OVA for the story was released on February 15, 2012 by Ufotable. There are some artistic liberties with the OVA story, such as Kaori becoming the protagonist, as well as new side characters to boot.

Trailer for the OVA can be viewed here.

Tropes from the OVA: