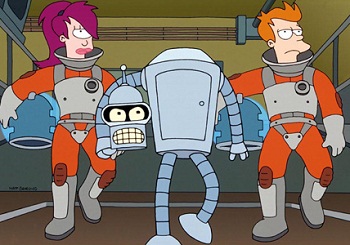 Some robots are apparently constructed of easily detached (and easily reconnected) parts. An arm fell off? The head fell off? No sweat, just screw or push it back on, since they usually are as easy to connect as LEGO. Use it as a weapon, why don't you? Sometimes it appears that each of their parts is self-sufficient and can function on its own.

This is generally justified by having the power source and CPU being the only real parts that matter; everything else can be repaired or replaced. Kinda makes sense when you look at a computer, which will continue running as usual after you unplug everything but the power cord. That doesn't mean it makes sense every time.

Can get a bit ridiculous if the robot is easily rebuilt after things like explosions, which logically should misshape the parts that reconnect. To go to the computer analogy, your PC will work if you take anything but the power cord out, but it won't work that well if you do something like shoot it with a shotgun. (On the other hand, sometimes things do work after bending.