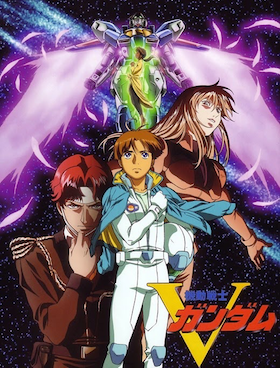 Don't Stop, Carry On! Don't Stop, Shining On!.
Even in space, humans still continue their long history of warfare...
Advertisement:

Mobile Suit Victory Gundam, or just V Gundam, is an anime television program set in the Gundam universe. It consists of 51 episodes, and was directed by Gundam creator Yoshiyuki Tomino. It is the fourth complete series set in the Universal Century timeline, and is widely regarded as the most depressing show of Tomino's U.C. saga.

Victory Gundam takes place in the year U.C. 0153 of the timeline, seventy-nine years from the One Year War. Char's rebellion 60 years ago and the Crossbone Vanguard 30 years ago have reduced the Earth Federation to complete impotency. The authoritarian Zanscare Empire, taking advantage of the situation, proceeds to invade Earth so that they can bring it under their control. In response, a group called the League Militaire rises up to defend the Earth in the Federation's place. Uso Ewin, the youngest Gundam protagonist yet, finds himself the pilot of the League Militaire's frontline mobile suit, the Victory Gundam, in an attempt to defeat the Zanscare forces.