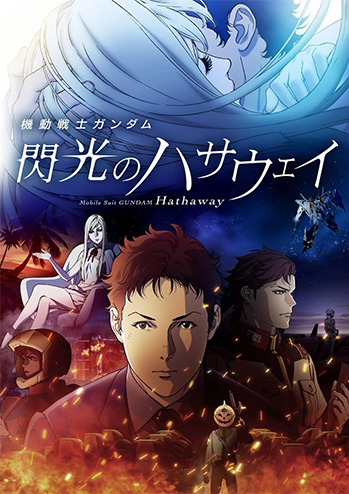 His flash is the hope of humanity
"At the end of the old era, overpopulation left the Earth itself critically sick, on the verge of death. Humanity departed for space, but today, a whole century later, the Earth still remains uncured! What does this mean? Precisely, it means that humanity must not yet return to Earth."
— Mafty Navue Erin
Advertisement:

Mobile Suit Gundam: Hathaway's Flash (機動戦士ガンダム 閃光のハサウェイ) is a February 1989 to May 1990 Gundam novel trilogy written by Yoshiyuki Tomino. It serves as a Sequel to Beltorchika's Children, the novelization of Mobile Suit Gundam: Char's Counterattack.

Universal Century 0105. It has been five years since the Republic of Zeon was officially folded back into the Earth Federation in the decade following the Second Neo Zeon War. However, conflict still endures. To accommodate the rich and powerful's desire to live as they please on an Earth still heavily ecologically damaged from decades of war, the Federation military has started deporting "undesirable" individuals to the space colonies. And in response, an anti-Federation Eco-Terrorist group known as Mafty and their enigmatic leader Mafty Navue Erin have begun launching attacks on major Federation officials to stop their abuse.

The story follows three central characters: Gigi Andalusia, a young woman who has become fascinated with Mafty Navue Erin's ideology and exploits due to her growing disillusionment with the costs of her own privilege. Kenneth Sleg, commander of the Earth Federation Forces' new special operations "Circe Unit" that has been assembled and provided with a Super Prototype mobile suit, the RX-104FF Penelope, to take Mafty down. And Hathaway Noa, son of well-known Earth Federation battleship captain Bright Noa... and the true identity of Mafty Navue Erin, who seeks to atone for his participation in the Second Neo Zeon War on the side of the increasingly corrupt Federation through his current activities. After Hathaway negotiates a deal with Anaheim Electronics for a Super Prototype of his own, the RX-105 Ξ (Xi / "Ksee") Gundam, these three find themselves continuously crossing paths as the Circe Unit tries to hunt down Mafty, and Hathaway prepares to use his new Gundam to strike a decisive blow on the Earth Federation's leadership.

An anime adaptation film trilogy serving as a direct sequel to Char's Counterattack was first teased at the Mobile Suit Gundam Narrative announcement in 2018, and officially confirmed later that year during the Gundam 40th Anniversary Project presentation. The first film was released on June 11, 2021. Netflix streamed the film overseas on July 1, 2021. A manga adaptation by Uroaki Sabashi, that serves as a sequel to Uroaki's manga adaptation of Beltorchika's Children, began on April 26, 2021, after publishing the prologue on March 26, 2020.