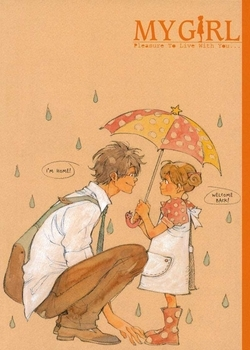 "Pleasure to live with you..."
Advertisement:

Kazama Masamune is a 23 year old bachelor with an ordinary job. He had an old flame, Youko, who left him for some unspecified reason. But one day, he hears that Youko has passed away, leaving a child behind in the care of her mother. HIS child, who he didn't even know existed, and who also happens to be the reason Youko abandoned him because she didn't want to bog him down.

A manga by Sumomo Yumeka, it combines decent art with a heartwarming, captivating story. Also has a drama adaptation.

Not to be confused with the Anna Chlumsky movie My Girl, nor the unrelated manhwa, or the song by The Temptations.