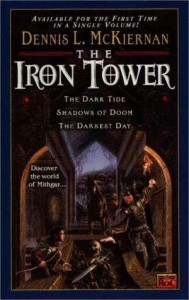 The Iron Tower is a trilogy of high fantasy novels in the Mithgar series by Dennis L. McKiernan.
Advertisement:

The trilogy was published in 1984, later being released as an omnibus in 2000.

For thousands of years, the forces of the dark lord Modru and his master Gyphon have been trapped in hiding, rendered powerless by the light of the sun. Now however, with the arrival of the Myrkenstone, Modru has found a way to blot out the sun, and his armies set out to ravage the land of Mithgar. Standing against him are the armies of man, led by King Aurion Redeye and his sons, Galen and Igon. They will not be enough, however, and Aurion, desperate to hold back the dark tide of Rucks, Hloks, Ogrus, and worse, calls for aid from the other good races of Mithgar.

Tuck Underbank is a Warrow—a small, elf-like humanoid renowned for their ability as archers. Having left home with a band of friends to become Thornwalkers—guardians of the border—Tuck finds himself recruited into the king's army when his captain, Patrel Rushlock, answers Aurion's call for aid. Though Tuck doesn't know it, he's about to find himself at the centre of events that will shape the future of Mithgar for centuries to come.