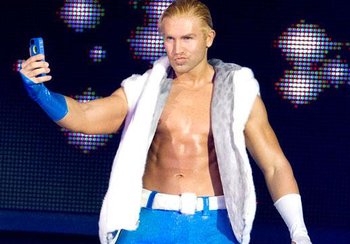 Look, everyone! It's Tyler!
Advertisement:

Mattias Clement (born January 19, 1988) is a Canadian professional wrestler, best known for his time in WWE under the ring name Tyler Breeze.

Clement was trained by the revered Canadian superstar Lance Storm and first made a name for himself in the Canadian ECCW promotion. He joined WWE in 2010 and was given the ring name Mike Dalton. As Dalton, Clement won the FCW championship from Leo Kruger, but unfortunately dropped it back to him a month later. When FCW became WWE NXT, Dalton's momentum cooled, as the fans typically aren't receptive to homegrown wrestlers without gimmicks. Thus, Mike Dalton became Tyler Breeze, a vain male model. After Kevin Owens left NXT to go to the main roster, longtime midcarder Breeze became the top male heel on NXT before transitioning to the main roster himself a few months later, aligning himself with Summer Rae and engaging in a feud with Dolph Ziggler. He later formed a comedy tag team (Breezango aka the Fashion Police) with Fandango, known for their backstage "Fashion Files" segments. After Fandango was shelved by an injury, Breeze disappeared from TV, until he returned to NXT in 2019 and picked up more or less where he left off.