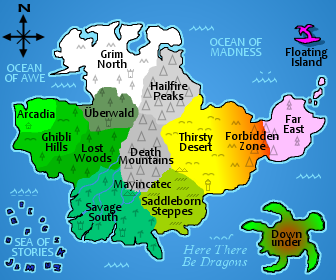 Even maps can be Troperiffic.note Case in point — here's what's in the map: Arcadia, Born in the Saddle, Death Mountain, Enchanted Forest, Far East, Floating Continent, Forbidden Zone, Ghibli Hills, Grim Up North, Hailfire Peaks, Here There Be Dragons, Land Down Under, Mayincatec, Ocean Awe, Ocean Madness, The Savage South, Sea Stories, Thirsty Desert, Turtle Island, and Überwald.
"I wisely started with a map and made the story fit... the other way about lands one in confusions and impossibilities."
— J. R. R. Tolkien
Advertisement:

Have a High Fantasy story of a group of heroes traveling the world in order to fulfill their quest? Then you must include a map!

Maps of fantasy worlds have been a feature of Fantasy books ever since L. Frank Baum's Land of Oz. A visual reference can be very handy. Often drawn in elaborate script, pointing out the Doomed Hometown, The Good Kingdom, The Empire, various Fantasy Counterpart Cultures, each of the Standard Fantasy Races' lands, many of the Wacky Wayside Tribes, the dangerous Forbidden Zone (Mordor) and the Enchanted Forest. Diana Wynne Jones's The Tough Guide to Fantasyland has a few things to say on the subject of maps, including the fact that if you're on a quest you may expect to visit every single place marked on them.

Fantasy world maps will often have roughly the proportions of a standard book page so that all the places in the fantasy world can fit conveniently on the map - the Law of Cartographical Elegance. Really deluxe worlds are proportioned like two pages side by side, thereby indicating they rate a hardcover edition with endpapers. Fantasy world maps sometimes also have a tendency to make it seem as if the world is literally flat.

When the map doesn't make any geographical sense, it's a Patchwork Map, though these can be sometimes justified by the use of magic. A variation occurs when maps of real places are included in a novel where it helps follow the intrigue.

Sometimes complicated by opaque library book covers that cannot be removed from the book. In that case, there will forever be one side of the map that you cannot see without breaking the book cover, though if you're lucky the map will be on the inside of both the front and back covers, covering up the left and right sides respectively. This may help explain why (with a little monster-powered-by-evil-source-you-are-getting-closer-to-in-order-to-remove Hand Wave explanation) you can't just acquire a boat and kill the sea monster now that the sea storm that it entered by is over.