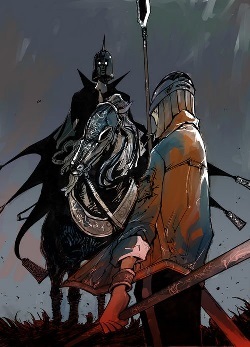 Other manhwa by Kum-Chel Ryu:
Vagrant Soldier Ares (떠돌이 용병 아레스) is a Korean manhwa written and drawn by Kum-chel Ryu. It is a war epic that spans 26 volumes. The story centers around young swordsman Ares and takes place in a world similar to Ancient Rome.
Advertisement:

The world of Ares is similar to Ancient Rome and shares important names with that history. The main characters belong to or ally with the central country of Chronos. Daraak Empire and the Radnik Alliance flank Chronos' western border, Isiris flanks its southern border, Chronos' ally, Silonica, flanks its eastern border, and the island nation of Minos is off its northern coast.

At the story's onset, a young warrior named Ares meets Mikael when both enlist with Temple Mercenaries, the most respected soldiers-for-hire in Chronos. Their comrades Baroona and Gohue are also soldiers for Temple Mercenaries. In their first mission, they put down a band of bandits that have been terrorizing a remote village.

The king of Chronos has neglected his duties, and neighboring states contemplate invasion. Temple Mercenaries are hired by Chronosian general Icarus for a pre-emptive attack against Minos in cooperation with their ally, Silonica. There, the four meet Ariadne, Ares´s future girlfriend, and her bodyguard, the young, able Helena. During the invasion, Ares protects Ariadne, winning the respect of the initially antagonistic Helena. Mikael and Baroona attract the attention of Icarus when Mikael defeats General Kentaro, a champion of Minos. The Temple Mercenaries succeed in capturing the Minoian king and force him to stop attacking Chronos and General Icarus is hailed as a hero.

However this is the beginning, there are forces both inside and outside of Chronos, that want to conquer that kingdom for various reasons.

Ares has examples of: