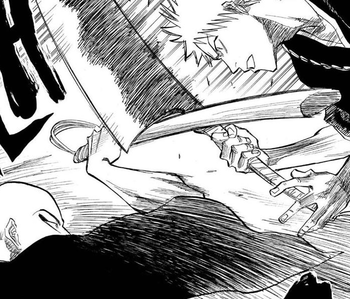 Use of a sword's sheath as a weapon. Assuming it's sturdy enough, it can work as a club or as a defensive tool.
Advertisement:

If you still have the Cool Sword, then you can wield them both, or just leave the sheath on to pack an extra punch. If someone is using the sheath instead of the blade, it may be because they aren't intending to kill their opponent.

An Iaijutsu Practitioner may use the sheath as a primary weapon, for feinting or stunning, or to show that it's not yet time to get dangerous.