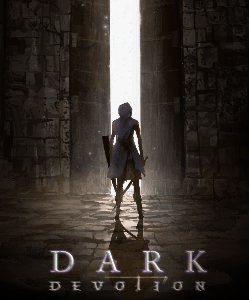 Dark Devotion is a 2D side-view Hack and Slash game, developed by the French studio Hibernian Workshop, where you take on the role of a female Templar initiative, who is sent to purge the ancient fortress of the order which is connected to many of their darkest secrets, and has long been overrun by the forces of darkness. It was funded

See Salt and Sanctuary for the Dark Souls in 2D Trope Codifier, and Death's Gambit, Unworthy, Void Memory, and Blasphemous for the other late 2010s 2D Side View games with heavy Dark Souls inspirations.

Not to be confused with a 2019 Taiwanese horror game Devotion.