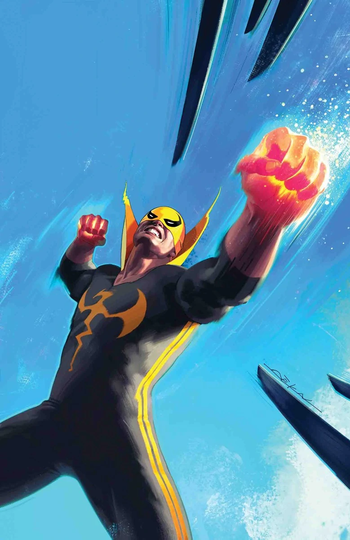 Sometimes a plain old garden-variety punch just won't cut it, and just punching harder or faster isn't doing the job either. It needs a little something extra. It needs to be enhanced. That's what this is: a powered up punch. Popular punch-enhancers include explosives, magic, ki, elemental damage, charging the punch and all manner of Applied Phlebotinum. A more mundane case would Weighted Gloves.
Advertisement:

If a Boxing Battler or punching Extremity Extremist has a Limit Break, Special Attack, or Signature Move, chances are it'll be one of these. The magical variation is a common tool of the Kung-Fu Wizard. Likely to cause the victim to be Punched Across the Room.

Super-Trope to Elemental Punch and Rocket Punch. If it's an external weapon such as brass knuckles or a glove that gives a character this ability, it's a Power Fist. Compare and contrast Pressure Point and Attack Its Weak Point, where it's the area attacked, as opposed to a property of the punch itself, that makes it special. See also Megaton Punch, a comedic trope in which the strength of the punch usually goes unexplained.

Not to be confused with spiking the punch.