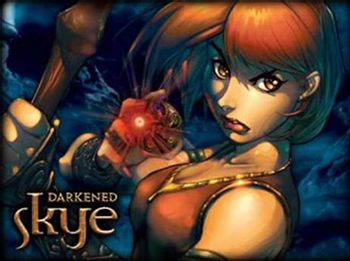 Save the Rainbow. Taste the Rainbow.
"This [premise] might sound like an inane game idea based on accounting instead of good sense—theoretically, that's true, but in practice, it's a bit far off the mark. Darkened Skye turns out to be a colorful and fairly entertaining game that's surprisingly funny."
— GameSpot

Prepare yourself for a one-of-a-kind game...

Darkened Skye is a 2002 Action-Adventure game developed by Boston Animation and published by Simon & Schuster Interactive for Nintendo GameCube and PC. At first glance, it looks like your ordinary kind of action game. In the far-off and decidedly fictional land of Lynlora, you play as Skye, a bored shepherdess, who is lamenting her fate of being bored and trying to keep track of all these damn sheep when, suddenly, a commotion off in a clearing attracts her attention. When she goes to investigate, she finds an ancient magical artifact; a flattened spheroid, orange, with an S in the center. She takes it to the local wisewoman, who tells her... "Why, it's a Skittles!"... wait, what? You heard that right, we are talking about Skittles, the candy. We'll give you a moment to collect your thoughts... are you done?

"Skittles are the source of all magic (Fancy you not knowing that!) and gathering them is vital to erase the darkness on Lynlora's sky. So our protagonist, Skye, sets off on a quest to return the rainbow to Lynlora, thereby returning Skittles and magic along with it." It was specifically based on a series of Skittles television commercials.

Darkened Skye is commonly held up as the finest example of advergame, Writer Revolt, or Stealth Parody based on the accounts of one executive producer

, noted that the developer was paying to use the license, and nearly backed out when the game was finished (but Skittles were already very interwoven into the gameplay).