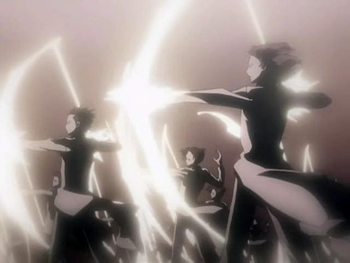 Their name means "destroyer" for a reason.
Advertisement:

Sometimes, archers in fantasy settings come across these peculiar weapons: Energy Bows, bows and crossbows without the pesky need for arrows.

Though these weapons may impart some magical advantage such as Bottomless Magazines (in the context of being able to shoot continuously with no reloading), they will still need to be operated in the same fashion as a mundane bow would, including nocking. This is despite the fact that they may lack critical parts of a mundane bow (like the string) and their projectiles may not be subject to forces like gravity or wind, making it more awkward for a trained archer to operate.

One is a solid bow that does not fire mundane arrows, but some sort of energy-based beam or projectile instead. These kind of energy bows are more common, and may or may not double as melee weapons.

Two, the bow itself is made of energy: Hard Light is common, but there are also cases of bows made of fire and other usually-formless materials. They may or may not shoot arrows made from the same material as the bow.

Sometimes Energy Bows pop up in Sentai shows as the weapon of The Chick or Lady of War, and may be related to Ki Manipulation. In other settings, it's a natural weapon of choice for the Magical Native American.

May overlap with Abnormal Ammo, Spontaneous Weapon Creation, Sacred Bow and Arrows, and with Invisible Bowstring.

A double-bladed weapon that can also shoot lightning arrows.

A double-bladed weapon that can also shoot lightning arrows.