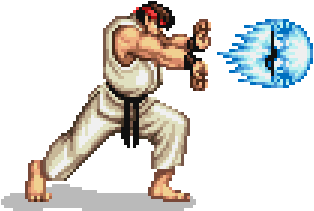 An Energy Weapon, and a specific subtype of Ki Manipulation or Functional Magic or, occasionally, a gun that fires one or more glowing orbs of Pure Energy/Pure Magic. Most commonly made of light, electricity or fire.

Warning: just because it's shaped like a ball doesn't always mean it will bounce off flat surfaces (although if it does, expect it to instantly destroy anything it touches). In fact, they're far more likely to explode on impact, sometimes in an equally spherical blast. You may need special equipment if you want to play tennis. Often created by Sucking-In Lines.

See also Kamehame Hadouken, which may overlap. Supertrope to Fireballs. Compare Sphere of Power, which covers your body instead.