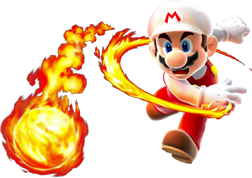 The power of the gods in the hands of a plumber.
Genkai: Hm... I think I've seen this technique before...
Botan: You mean like Shorin might have stolen that technique from some psychic?
Genkai: No that's not it. I'm just saying he's throwing fireballs. It's a very cliche anime technique.
— Yu Yu Hakusho Abridged
Advertisement:

A common power for pyro-elementalists, wizards, psychics, dragons, and even martial artists. Fire, in spite of its fearsome appeal, is not known for being tangible or portable. Rolling it into a ball gives it the semblance of a physical structure, and lets you throw it, bounce it and dodge it at will, which are quite desirable traits in Video Games and tabletop games.

Most often, fireballs are formed with and thrown from the user's hands. Less often, they're used as part of a Breath Weapon — although it's much more common for fire-based breath weapons to take the form of a simple stream of fire, it's also not uncommon for certain creatures to be able to spit out discrete fireballs.

Fireballs have a tendency to move in an unusual fashion — possibly by hovering or drifting at slow speeds, or by bouncing along the ground. What happens when a fireball impacts is, similarly, entirely up in the air. Maybe Stuff Blows Up, leaving a sphere of annihilation. Other times, it just puffs out like a harmless burst of wind. Only sometimes does it actually set things on fire.

Not to be confused with Fireball, Great Balls of Fire! or Outrun the Fireball. A Sub-Trope of Energy Ball and Playing with Fire. In cases where the fireball is a living thing in its own right, see Elemental Embodiment and Evil Living Flames.