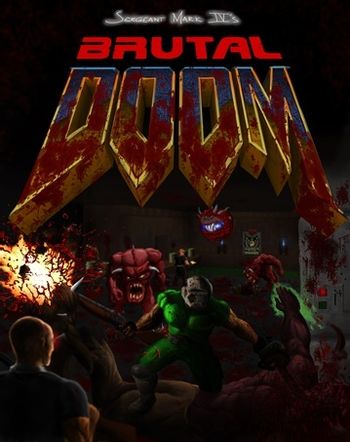 In 2010, a guy by the name of Sergeant_Mark_IV decided that Doom wasn't violent enough. So he made a mod for it.

The end result was Brutal Doom, a mod that takes the original game (or Doom II, or pretty much any IWAD you throw at itnote Yes, even freakin' Chex Quest. Just ask The Angry Video Game Nerd.) and pumps new life into the MS-DOS classic. Taking cues from the infamous Doom comic book, Brutal Doom allows Doomguy to perform all manner of new tricks on the forces of Hell, and for them to respond in kind. Ever since its first release in 2012, the mod's continued to receive updates and additional content.

, but be forewarned—to say that this mod is gory is an understatement. You will literally paint walls red.

On New Year's Eve of 2016, Sergeant_Mark_IV released the Brutal Doom Starter Pack along with Version v20b. This campaign—which initially was called Hell on Earth but officially renamed to Extermination Day as of v21—is a three-episode standalone campaign which acts like a distilled retelling of the original two games. The first episode, Hell on Mars, changes the setting of the original Doom's first two episodes to a UAC research base on Mars. The second episode, Battle of Los Angeles, retells the events of Doom's fourth episode and the first half of Doom II. The third episode, Behind Hellish Lines, takes the action directly into Hell in a new take on the final levels of Doom II's campaign.

In November 2016, a remake of Doom 64 called Brutal Doom 64 was also released. Unlike Brutal Doom itself, the mod only focuses on remaking Doom 64 with enhanced Brutal Doom visual effects and other additions, lacking the over the top brutal moves seen in Brutal Doom.

has been released, allowing the Ludicrous Gibs effect of Brutal Doom to be used by many, many other mods. It was a more cross-script friendly version of "Ketchup" released earlier that removes monster coding dependency, thus allowing all monsters, including those from other mods, to be gibbed without changing the monster script.

In November 2019, Sergeant_Mark_IV announced that he is working on a new mod called Viet Doom, a total conversion for Doom themed on The Vietnam War.

A Spiritual Successor named Brutal Fate, also developed by Sergeant_Mark_IV, was announced in 2020.

Note: As the mod relies on the data from whatever IWAD you use with it, all tropes listed on the Doom page also apply here.