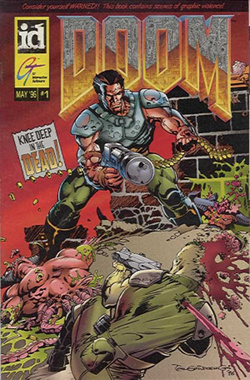 A comic adapted from the video game Doom.

The hero, a berserker packin' man-and-a-half with a 12.0 on a 10.0 scale of badness, is attempting to RIP AND TEAR a huge cyberdemon's huge guts with his Night Train, when his berserker pack runs out, leaving the demon bonking unharmed. His Unstoppable Rage over, he spends the rest of the comic communicating his desire to have guns (via a chainsaw) looking for a gun big enough to blow the demon away. But even if he personally stops this alien invasion, what kind of planet will we be leaving to our children? And our children's children? How will they live with all the undisposed toxic waste that we left to them to deal with and... oh, the humanity, his big gun is out of bullets! (Better believe it, soldier!) Dynamite!

In other words, this 90s comic book (originally a convention giveaway) has become a Cult Classic thanks to being nonsensical and over-the-top.

You can read it for yourself here

or with appropriate voiceover here

Linkara reviewed it in his best attempt at the Ultimate Warrior voice here.

Not not be confused with the villain Doctor Doom.