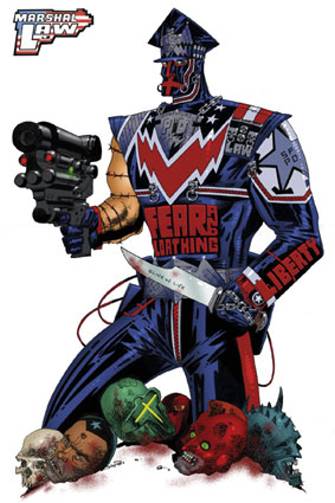 I'm a Hero Hunter. I hunt heroes. Haven't found any yet.
If Watchmen did in any way kill off the superhero - which is a dubious proposition - then Marshal Law has taken it further with this wonderful act of necrophilia, where it has degraded the corpse in a really amusing way. I think that's great... Pat and Kevin do it so well, with such style and with such obvious malice; that's the fun thing about Marshal Law. They're not just kidding, they really hate superheroes.
— Alan Moore, The Comics Journal #138
Advertisement:

Set 20 Minutes into the Future, Marshal Law is the story of Joe Gilmore, a.k.a. Marshal Law. A violent Anti-Hero super-hero cop, Marshal Law's job is to kill super-heroes and other super-powered criminals, most of which got their powers from the US Government.

A biting satire of super-hero comics, the series was published by Marvel Comics Epic line before being moved onto a variety of other publishers. The series was famous for its satirical look at super-heroes and the public's love of them, while exploring the seedy underbelly of what it means to have absolute power. It also offered a rather scathing attack on American foreign policy under Reagan in the 1980s, as Reagan's war against communism in Central America serves as the backdrop of Marshal Law's origin.

The series was created by Pat Mills and drawn by Kevin O'Neill. The series itself was a minor hit but has only recently had the rights sorted out; DC Comics printed a hardcover collection of the core books in 2013 (although unfortunately some important bits of character development took place in crossovers with other characters that aren't collected in the edition).

Though not a huge hit in its time, Marshal Law would be Vindicated by History, and its themes would be revisited and expanded in The Boys and Stormwatch: Team Achilles. Ironically (and in the wake of the success of The Boys in particular), the series has been subject to revisionism with focus on the humanity in the character compared to the hero hunters in The Boys and Team Achilles.

Also, whatever you do, do not confuse this character with the resident Bruce Lee Clone of Tekken Marshall Law. Or mistake this series for the late-nineties TV series Martial Law. Or, of course, the governing tactic of the same name.