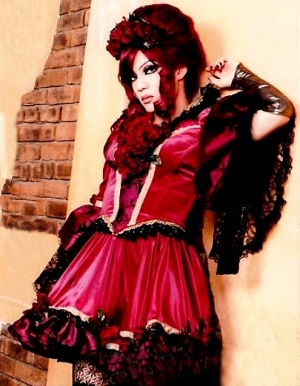 This is one of his less-flashy outfits.
Advertisement:

Kaya is a synthpop Visual Kei singer known for his wide vocal range, flamboyant fashion style (usually involving dresses and other feminine attire), theatrical live shows, and being one of the few openly gay men in the Japanese music industry.

He started off as the vocalist for a few small electro-VK bands before forming Schwarz Stein with musician Hora in 2001. The duo released several singles and an album before breaking up due to Creative Differences in 2004, leading Kaya to start off his solo career in 2006. He was first signed to Midi:Nette, Mana's record label, before moving to Next Media Communications, a major label—then going back to being an indie artist when that label went bankrupt in 2009.

Kaya has performed around the world, touring Europe and South America with several concerts in the United States as well. He's collaborated with several other Visual Kei musicians, and, in 2011, reunited with Hora for a one-time Schwarz Stein reunion concert.

Interestingly, despite performing almost exclusively synthpop, Kaya is heavily connected to the Visual Kei Heavy Metal scene—for example, in 2007, he was part of the "Node of Scherzo

" project along with vocalist Kamijo, guitarist Hizaki, and bassist Jasmine You of the symphonic power metal band Versailles and fellow solo singer Juka, former vocalist of the Gothic Metal band Moi dix Mois. Since then, he's performed with and alongside them and other metal groups at numerous events. In 2012, he collaborated with Hizaki again for his single "Vampire Requiem", resulting in "Curse of Rose".

Tropes applying to Kaya and his music: