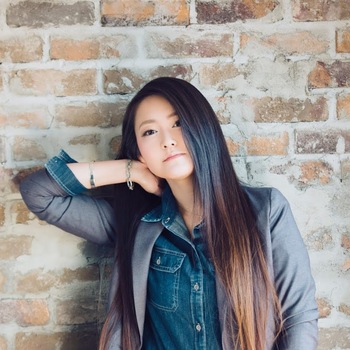 Mami Kawada (born February 13, 1980 in Sapporo, Japan) is a Japanese retired singer and lyricist, known for her work in anime music. She is particularly associated to the Light Novel boom of the late 2000s through her relationship with the franchises Shakugan no Shana and A Certain Magical Index, for which she performed multiple openings, endings and insert themes.
Advertisement:

A trainee of Eiko Shimamiya, Kawada started her career in 1997 as part of the former's production group I've Sound. She was often paired with fellow member Kotoko, performing both solo as a duo. Her real breakout came in 2005, however, after switching to Geneon Entertainment (now NBC Universal Entertainment Japan), when her single "Hishoku no Sora", used as Shana's first opening theme, soared at number 11 at the Oricon weekly charts. This tend would mark the rest of his career, achieving similar positions a few more times and collaborating with similar-sounding artists like Maon Kurosaki, before she announced her retirement from music industry in 2016.

Kawada's genre is a very personal mix of J-pop, electronic rock and trance. She stands for her distinctive voice, ethereal electronics and heartfelt lyrics, which help to transmit a sensation of trascendence and power.