Music / Katrina and the Waves 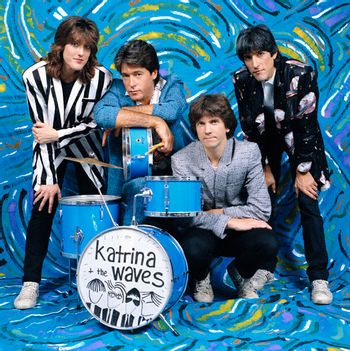 Katrina and the Waves were an English New Wave/Rock band active between 1981-1999, known for writing the song "Walking on Sunshine" and winning the 1997 Eurovision song contest. Its members were: vocalist and guitarist Katrina Leskanich, guitarist Kimberley Rew, bassist Vince de la Cruz and drummer Alex Cooper. In a similar story to The Pretenders, the band was British but with an American lead singer.

They recorded a bunch of albums, but the only song that everybody knows is their upbeat 1985 hit single "Walking on Sunshine". They had a few more singles chart, technically saving them from being a One-Hit Wonder, but nobody remembers them. They suddenly became big again when their song "Love Shine a Light" won the 1997 Eurovision Song Contest and became their biggest hit in the UK, but dissolved a few years later.

Apart from the fact that "Walking on Sunshine" is Philip J. Fry's favourite song, and also the theme of The Stephanie Miller Show, there really isn't anything else to say about them. The lead singer, Katrina Leskanich, has a solo career and performs a mix of Waves and her own material in concert though for legal reasons she can't be billed as the band.