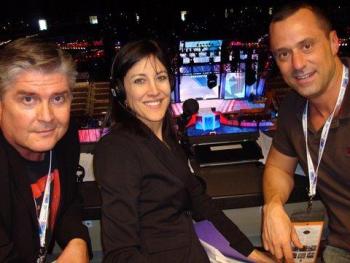 Left to right: Jim Ward, Stephanie Miller and Chris Lavoie.
"It's like a Mensa meeting with fart jokes!"
Advertisement:

The Stephanie Miller Show is a syndicated liberal radio Talk Show that has been in production since September 2004. Like its TV equivalent The Daily Show, it straddles the line between a straight news show and a Comedy Series. While Miller and her co-hosts (aka "The Mooks") comment on the news and interview politicians, actors and other newsmakers on a daily basis, the show has a "Morning Zoo" feel, complete with Sketch Comedy, celebrity impressions, wacky Stock Sound Effects, and an overall atmosphere of genial goofiness.

The people behind The Stephanie Miller Show are:

In 2011, Stephanie was named Woman of the Year by Talkers magazine.

In March 2012, a televised version of the show began appearing on Current TV under the title Talking Liberally with Stephanie Miller. The TV version currently runs on Free Speech TV.

"It's the Stephanie Miller Tropes!"