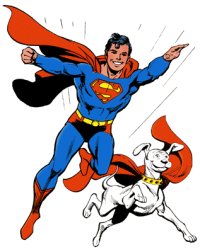 "It doesn't matter in Gladiator that Romans didn't use dogs on the battlefield, or that the dog disappears from the movie immediately afterward. It's a very simple equation: The good guys are whichever team the dog shows allegiance to, because the dog would never make that kind of mistake, especially if it's an adorable dog."
— Cracked.com, "6 Tricks Movies Use to Make Sure You Root for the Right Guy"

The surest way to show that a hero is undeniably a hero and an awesome guy is to show him hanging out with and totally loving his dog. It's his dog. Who ever heard of an awesome dude that doesn't love his dog?

Think of this trope as being the physical manifestation of Pet the Dog. If a character has a dog which is around him constantly and whom he is always nice, respectful, and loving to, then that means a scene literally cannot go by in which he does not Pet The Dog. So of course he must be noble and good at heart. Villains who are cruel enough to mess with the dog, on the other hand, can expect full-on retribution from the hero in question, although certain villains who also own and love dogs tend to consider the dog-owning hero a Worthy Opponent.

The dog in question is frequently a Canine Companion, sometimes also a Post-Apocalyptic Dog. See also Evil-Detecting Dog, for some of the logic behind this. See also Heroic Dog.