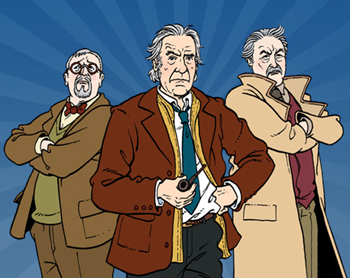 A series of straight-to-CD plays by Bafflegab Productions

(formerly Cosmic Hobo), created by Simon Barnard and Paul Morris. They are set in the mid-1930s and chronicle the exploits of academic and ghost story author Professor Edward P. Dunning, and old-school policeman Inspector Lionheart as they investigate "the out of the ordinary, the unexplained. The downright weird." The plays are a heady mix of supernatural horror and comedy, recalling a sort of cosy world of 1930s adventure.

There have been nine CD releases so far, and three short episodes for free download from the Bafflegab website. They star Doctor Who regulars Terry "Davros" Molloy as Dunning and the late Nicholas Courtney, AKA The Brigadier as Lionheart. In the sixth release, following Courtney's sad death, a new character, Harry "Thumper" Crow was introduced, played by David Warner. Other characters have included an exceptionally camp Aleister Crowley, a Great Old One, and rubbish explorer Sir Basil Champion, whilst guest stars such as Leslie Phillips, Nigel Havers and BRIAN BLESSED have popped up.

The ten so far released are:

The three "specials" are:

Terry Molloy himself has described it as "Tintin and Dick Barton meets The X-Files". A comic adaptation of The Nazad Conspiracy has also been produced.

Can I tempt you to some tropes?