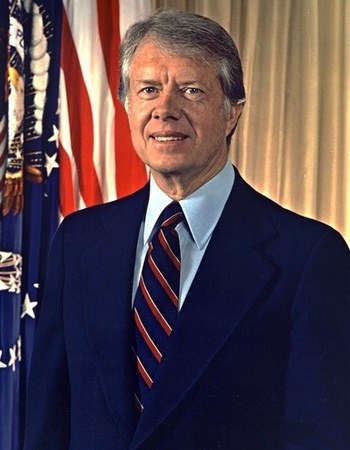 "You just have to have a simple faith."
"To be true to ourselves, we must be true to others. We will not behave in foreign places so as to violate our rules and standards here at home, for we know that the trust which our Nation earns is essential to our strength."
— Inaugural address, January 20, 1977
Advertisement:

Carter began his political career in the Georgia state senate, and after an unsuccessful run for governor in 1966, was elected on his second attempt in 1970, positing himself as a segregationist to win popular support the second time around before revealing his actual left-wing politics during his victory speech, to the audience's shock.note The people who supported Carter's actual politics meanwhile weren't as thrown off: he privately confided with his supporters about his plans at the start of his 1970 campaign, warning them that he'd be saying a lot of things they wouldn't like and that pretending to be a segregationist was the only way he could move votes in the very southern state of Georgia. After an attempt to become running-mate to George McGovern at the 1972 presidential election ended in failure, Carter decided to instead position himself for the top job at the next election, and earned a Dark Horse Victory in part due to the party's more liberal wing not being able to coalesce around a single candidate, and also because it was felt they needed a candidate who could win the Deep South states that Richard Nixon had flipped to the Republicans in his two elections. In this he was successful: Carter won all the Southern states except Virginia, making him the last Democrat to carry a majority of the South. The end result was a close and surprising win for Carter, which was attributed primarily to lingering resentment at the Republicans over Watergate (Carter's wholesome outsider image contrasting the corruption inextricably associated with Nixon), and also due to Ford having run a poor campaign. Carter's victory was the only one the Democrats would win between 1968 and 1988, with the Republicans winning every other Presidential election during that timeframe by a landslide.

Considering that his presidency happened over forty years ago, a look around the Internet will astonish many readers with just how much of a polarizing figure Jimmy Carter continues to be. Conservatives declare that his watch was a mess, while liberals assert that he inherited a mess: the huge Vietnam War deficit, an economy that for the first time ever suffered rampant inflation while stagnating (which led to the portmanteau "stagflation" to be coined to describe it), and a national post-Vietnam, post-Watergate funk which was described as a "malaise" — a word that is hung around his neck by conservative commentators (and The Simpsons) to this day, though Carter himself never actually used it. "Stagflation" was exacerbated by the 1979 oil crisis; long gas lines and high energy costs contributed to the national unhappiness. In an attempt to lead by example, the President lowered the thermostats in the White House and donned sweaters to keep warm instead — which, for many, became a hated symbol of the lifestyle sacrifices which they believed his policies had made necessary.

That said, much of Carter's popularity with liberals came after his administration. Carter ran as a centrist Democrat with a platform on Christian values and small government not dissimilar from Ronald Reagan four years later. Unlike previous Democratic Presidents, Carter pivoted away from the welfare policies of the New Deal and Great Society in favor of deregulation and privatization, which angered many liberals within his own party. He was considered a micromanager who had a limited White House staff and difficult relations with both his own cabinet and Congress.note Most notably, during the debate over health care reform, Carter rejected the single-payer option championed by Senator Ted Kennedy and progressives in favor of market-based approach despite the single-payer proposal being more popular. In 1980, Carter faced a strong primary challenge from Ted Kennedy, who ran on the idea that Carter had sold out the Party's progressive wing. Carter secured his nomination in the last brokered convention to date.note Walter Mondale went into the 1984 Democratic convention without a majority of delegates, but the second place challenger, Gary Hart, made no serious effort to contest his nomination at the convention.

On the foreign policy front, meanwhile, the Iranian Revolution of 1979 and the subsequent protracted holding of American hostages seemed to many to demonstrate the feebleness, incompetence and ineptitude of the Carter administration's foreign policy, an impression by no means dispelled by a bungled attempt to free the hostages by force. In fairness, the reason that Operation: EAGLE CLAW was aborted before it ever reached the US Embassy was mechanical issues, such is the fickleness of helicopters. Still, the inadequacy of his response to an act of war was emblematic of his presidency. (Conspiracy theorists have held that there was an arrangement between the Ayatollah and the Reagan campaign as the hostages were released on Inauguration Day 1981, almost immediately after Reagan had taken the oath.) Carter's term also saw the Soviets deploy better nuclear weapons and invade Afghanistan, resulting in the SALT II arms control treaty not being put before the Democratic-controlled Senate. And, again emblematically, Carter withdrew the USA from the 1980 Olympics. Both the Iranian Revolution and Soviet-Afghan War lead to him formulating the Carter Doctrine and green-lighting Operation Cyclone. The former states that the United States will do anything to defend its self-interests in the Middle East and the latter allowed the funding and arming of anti-Soviet Afghan mujahideen. Both of these policies expanded and continued by his successors, which unfortunately lead to the US being embroiled in Middle Eastern conflicts like the controversial War on Terror.

Still, his term saw a lasting (if somewhat frosty) peace negotiated between Israel and Egypt, having sponsored a meeting between Israeli Prime Minister Menachem Begin and Egyptian President Anwar Sadat at Camp David. The only significant and lasting peace settlement in the modern Middle East, it's so well-respected that even Egypt's new post-revolution government is honoring it. His administration negotiated the return of the Panama Canal to Panama at the end of the 20th century. Additionally, a few on the Left might claim that his economic policies may have paid off in the next decade and that their success had been wrongly attributed to Ronald Reagan.

The emphasis that the Carter administration placed on human rights garnered respect even among his political opponents who never doubted the sincerity of Carter's intentions. More than a few people argue that Carter was essentially a nice guy who was good at humanitarianism and charity work, but was saddled with a job that he wasn't prepared for, at a bad time to have it. Carter's former speechwriter Jimmy Fallows has opined

that Carter's administration suffered from his lack of vision and an over-reliance on yes-men. People will say that he would have made a better Secretary of State than a President of the United States.

Carter has had one of the most active post-presidencies of any former president, founding the Carter Center to work toward peace, which helped him win a Nobel Peace Prize in 2002. (Contrary to popular opinion, Carter didn't win in 1978 for negotiating the Camp David Accords; rather, Begin and Sadat each won.) His work with charities such as Habitat for Humanity gives him the interesting designation of causing people to like him better for his post-presidency activities than the ones during his presidency. His 2014 project was supporting the eradication of guinea worm

-causing parasite now found mainly in South Sudan and Chad. The efforts have been largely successful, with just 27 cases in 2020 (down from millions in the 1980s). It will most likely be the second human diseasenote third overall; the rinderpest virus, which infects only cattle and other even-toed ungulates, was the second to be eradicated following smallpox and the first parasitic disease to be completely eradicated.

Nowadays, Carter remains remarkably healthy despite his advanced age, walking around without a cane, surviving the pancreatic cancer that killed his father and three siblings, and still doing humanitarian handiwork with his own hammer and tool belt, with Rosalynn at his side.

Satirical media portrayals of Carter focused on his southern-ness, ranging from portrayal as an incongruous Southern Gentleman out of place in a savvier Washington, to an out-and-out hickish bumpkin; his toothy smile became iconic. The "Redneck President" conception fell a bit out of favor once the nation was introduced to Jimmy's brother, Billy Carter, who generally fit the stereotype a lot better, putting Jimmy in the role of the straight man. Given that the former president is still alive and working for diplomacy and Habitat, a lot of portrayals reference this. In the states of the former Confederacy, he was widely known as "The South's Revenge."

A few other facts about President Carter:

You just have to keep some simple tropes: