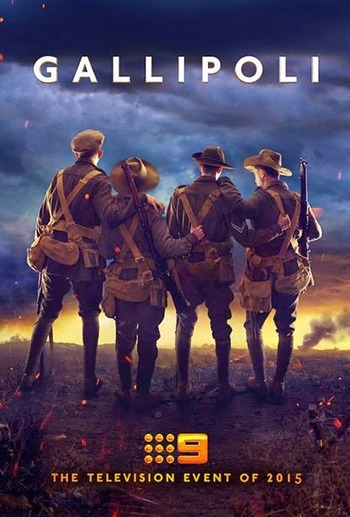 Some day we will understand.
"Gallipoli, the war that got away from its handlers. If it made more sense, it would be a lesser story...."
—Thomas "Tolly" Johnson
Advertisement:

Gallipoli (2015) is an Australian-produced mini-series made and released for the 100th-year anniversary of the Gallipoli Campaign. Seven episodes long, it detailed the stories of the soldiers of the Australian and New Zealand Army Corps, as well as the controversial political war being fought between their commanders and the public press.

A young Australian called Thomas "Tolly" Johnson (''Kodi Smit-McPhee), enlists into the ANZAC alongside his brother Bevan Johnson and their friends Dave Klein and Cliff Sutton from the same town, heading towards the fateful battle that shaped their nation's history, as well as losing their innocence and maybe even their lives to a pointless struggle.

Sir Ian Hamilton (John Bach), a distinguished senior officer in the British Army and the appointed commander of the Mediterranean Expeditionary Force whose staff operates off the coast of Gallipoli. He is confident in the coming victory over the Ottomans, but as the months wade by, he realises that his victory may be completely out of his reach, not to mention that his enemies may be even closer to him than he thinks....

A veteran English journalist, Ellis Ashmead-Bartlett (James Callis) lands on the peninsula only to witness the beginnings of a hopeless battle for the British. His critical views of the war eventually makes him an enemy to High Command, who will stop at nothing to censor all attempts to sabotage the campaign, but Bartlett is determined to reveal the truth to the public, before the bodies of young men continue to pile up.

"... Perhaps that's why after longer and more important battles are forgotten, it lingers in our imagination."