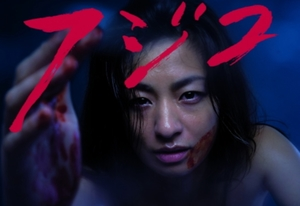 Fujiko is a 2015 psychological thriller-drama miniseries distributed by Hulu and J:COM. Based on the novel Satsujinki Fujiko no Shōdō by Yukiko Mari, the show stars Machiko Ono as renowned serial killer and death-row inmate Fujiko Uehara; Mitsuki Tanimura as Michiko Takamine, a young prize-winning journalist with a past of her own; and Kyōko Maya as Shigeko Shimoda, Fujiko's hospitable aunt and a member of a mysterious religious cult.

Three days after the suicide of a daughter of "Fujiko the Killer," Michiko receives the daughter's manuscript for a biography of Fujiko in the mail, and is subsequently tasked with writing a biography on the killer herself. Judging the manuscript to be biased by its author's perspective, Michiko interviews the mass murderer herself to corroborate the facts. As Fujiko's origin story begins to unravel, so do family secrets and the workings of yet another killer.