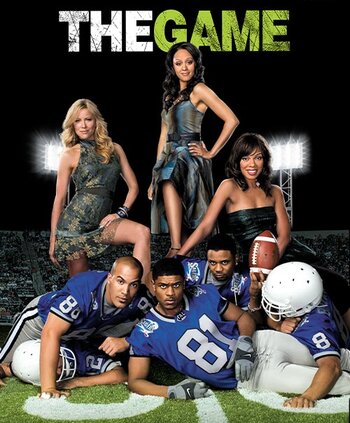 Back in 2006, The Game was one of the first TV shows that debuted with the newly-merged The CW network. The series centers on a trio of football players who play for the San Diego Sabers, and the women who support them. Derwin Davis (Pooch Hall) is the engaged rookie receiver who's trying to resist the temptation filled life the NFL offers, while veteran quarterback Malik Wright (Hosea Chanchez) already indulged into those same perks by building his own strip club and sleeping with enough women to fill a personal library of amateur porn. Aging wide receiver Jason Pitts (Coby Bell) has already experienced his fair share of the high life, but with his years in the league being numbered, he’s obsessed with winning an NFL championship ring to escape his father’s shadow. Jason’s also determined to avoid bankruptcy that affected his father and indirectly, himself, even though his actions are placing a strain on his own family.

The women are various modes of supportive, even when going through their own personal crises. Melanie Barnett (Tia Mowry), like fiance Derwin, is practically wide-eyed when adapting to the world of professional sports, along with the additional pressure of finishing medical school and eventually practice medicine. Former teen mom Tasha Mack (Wendy Raquel Robinson) doubles as Malik's manager, and often puts herself in compromising situations to support her troubled dating life, her career, and her son. Ex-cheerleader Kelly Pitts (Brittany Daniel) is often forced to balance her family life with husband Jason and their daughter Brittany, while navigating her way back into the working world and becoming more independent. However, obligations to her family and the Sabers organization often impede her in the worst ways.

The series ran for three seasons on The CW, before being canceled. BET then picked up the show for five additional seasons, and while Tia Mowry left after season 5, the show gained Lauren London, Jay Ellis, and Brandy as regulars. When The Game returned on Jan 11th, 2011, nineteen months since the CW’s cancellation, the ratings hit an unprecedented 7.7 million viewers during the premiere, the largest viewing audience for a sitcom premiere in cable history. The numbers dwindled to a steadier 4.4 million, come the season four finale, but it’s still much higher than the CW broadcasts. In fact, The Game’s ratings on BET often matched, or even ''surpassed'', those of the CW’s lineup at the time.

Moral of the Story: treat your audience like they matter, and they’ll reward you.

The series is a spinoff from Girlfriends, and shares the same universe as Moesha and The Parkers. In 2021, the series was rebooted on Paramount+ with Wendy Raquel Robinson and Hosea Chanchez returning and a new cast of characters and a new setting in Las Vegas.

Not to be confused the internet meme "The Game," which you just lost.