Useful Notes / From Russia with Nukes 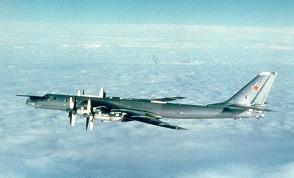 Do not feed the "Bear". No, seriously.note Pictured: The Tupolev Tu-95, probably one of, if not the fastest and noisiest propeller aircraft ever. Yep, it is just around 80mp/h slower than the US counterpart B-52 and can be heard from submarines. This virtual antique (older examples first came into service in 1952, at a time when most countries were looking towards jet-powered bombers) is still enough of a threat that allied nations send out their advanced jet fighters to escort them away when they stray too close.
Advertisement:
(Russian accent) "Russia has The Bomb, we have many bombs. We don't know where they all are. Maybe you want a dirty bomb."
— Robin Williams

What the Reds with Rockets and Russians with Rusting Rockets have - lots and lots of nukes. Where evil Soviets or Russians go in fiction, their nuclear weapons platforms are likely to be close behind. They also look cool and sound cool, making them great vehicles for baddies.

In Real Life, the Russian Federation is still the world's largest nuclear power with 5,830 active nuclear warheads, although this is considerably down from the 1986 peak of over 40,000 and over 3,000 of these are in storage as per the 2002 SORT Treaty. The USSR exceeded the US in raw numbers of warheads in 1978, a major factor in the Reagan defence expenditure increases.

They were developed in response to the United States' policy of Peace Through Superior Firepower. The Soviets' (well, to be honest, mutual) institutional paranoia and fear that they were going to get sneak attackednote Especially in the early 1980s with Pershing II and GLCM missiles in Western Europe. As Russians will point out to you, their experience of being sneak-attacked from the West in 1941 was extremely traumatic and their foreign policy since has concerned preventing this from happening again. They will also point out that the Soviet Union had a "no first use" policy for nuclear weapons, but the United States did not and still doesn't—Eisenhower unofficially had one, and successive presidents have maintained it, but it was never signed into law and is subject to presidential whim. (Post-Soviet Russia abandoned this policy in 1993, and reserves the right to use nuclear weapons in response to invasion.), Khruschev's love for stuff high-tech and a view that having the things in service supplanted other considerations, meaning that platforms arrived before they were fully military effective (early Soviet missile subs had short-range missiles and were sitting ducks for Western subs), or safe.

We'll look at the different types of delivery systems (because warheads are just boring). We'll cite Soviet/Russian and NATO designations for both (we'll ignore those silly bilateral RS ones, which the USSR just made up, as well as largely ignore the hard-to-remember GRAU codes used in the Russian military).

These weapons have appeared a lot in fiction, in both a nuclear and conventional role.

Before we begin a few notes on the Soviet/Russian nukes:

See Atomic Hate for what we are including.

Here we go. Due to the number of platforms, this is split into sub-entries.

Rather prone to A Nuclear Error, and, if the Russian Orthodox Church is to be believed, are watched over by St. Barbara.

NB: This trope used to be known as "Mnogo Nukes", a title still seen on other pages of the wiki (and above!). "Mnogo" is a Russian word meaning "a lot of" or "too many".