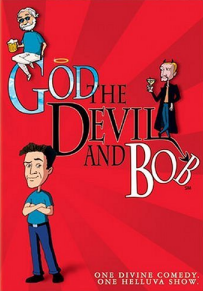 God, the Devil and Bob (2000) was a short-lived American animated series with only 4 episodes out of 13 shown in its first run.

Side characters include Bob's wife Donna, their kids Megan (a teenager) and Andy (a six-year-old), Bob's work buddies (a white pervert and a black guy/occasional Deadpan Snarker), and Smeck (The Devil's demon henchman/Chew Toy).

The show touched on many family issues, including death, puberty, and bullying, among others. The show caused a good deal of controversy due to its presumed mocking of the Christian faith, a largely inaccurate accusation leveled almost entirely by people who had never actually seen — and indeed refused to watch — the show (like they did with Monty Python's Life of Brian and The Last Temptation of Christ). Ironically, in a incredibly bizarre reverse example of Misaimed Fandom, the show's creator was an ordained clergyman with a favorable attitude towards the faith. It eventually made it to DVD in the US, several overseas markets did air the full series, and in 2011, the show's full run made its way into the Adult Swim lineup.

It's Just My Porch Light.

Bob tries to ask God to keep his father from going into the Light, only to learn the story behind the saying.

Example of:
Go into the Light

It's Just My Porch Light.

Bob tries to ask God to keep his father from going into the Light, only to learn the story behind the saying.