Go into the Light 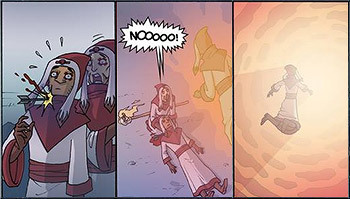 The stereotypical Near-Death Experience includes seeing a bright light, experiencing love coming from it, and sensing somehow that if you were really dead — not Only Mostly Dead — then you should go into it. Death is just the beginning, after all, and you probably had a very similar experience when you were being born.

Now, a sparkly light after death is seen as the functional means by which ghosts move on, as well as the difference between Near-Death Experience and Deader Than Dead. Entire plots have been built around convincing ghosts to Go Into the Light. Psychopomp-style versions of The Grim Reaper help guide you there with varying degrees of force.

Part of The Lowest Cosmic Denominator. Compare Disappears into Light. Often overlaps with Stairway to Heaven and Ending by Ascending.