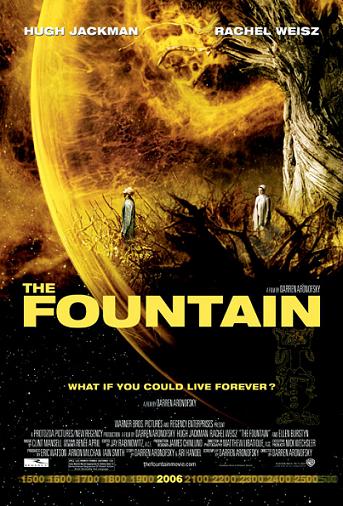 The Fountain is a 2006 Speculative Fiction film written and directed by Darren Aronofsky, starring Hugh Jackman and Rachel Weisz.

The movie follows Jackman as the protagonist in three different settings. In The Present Day Tommy Creo is an oncologist searching for a cure for his wife's brain cancer, and is obsessive in his pursuit to the point of leaving his wife to deal with her illness on her own most of the time. He stumbles across an extract from a South American tree that has promising results. Meanwhile, his wife comes to terms with her fate and is trying to finish a book which also happens to be about the second storyline.

In the second storyline, Tomás is a Spanish soldier during the Age of Exploration trying to defend his queen, Isabel, (again played by Weisz) from the Spanish Inquisition, when she sends him on a quest to South America where he is to find the Tree of Life.

In the third storyline, Tom, "the Astronaut," is a bald, monk-like man in a space bubble containing land and a tree. He is sustaining himself off of an extract of the tree but at the same time is rationing to avoid having the tree die. It seems he believes the tree holds some connection to his wife, who visits him in visions. We learn eventually that he is headed towards a star that his wife told him about in the present day timeline. He tattoos an elaborate pattern up his arm to mark the passage of time, like tree rings.

The story explores the themes of mortality and the natural cycle of life as well as the stages of loss.

Darren Aronofsky also wrote a graphic novel based on his original script, which was illustrated by artist Kent Williams and published by Vertigo Comics in November 2005, a full year before the film was released. Contrary to popular belief, the graphic novel isn't an adaptation of the film: Aronofsky wrote it during a period when the film was stuck in Development Hell, and it looked like it wasn't going to be made; he envisioned the graphic novel as an alternate way of bringing his vision to fruition.

If you're looking for a certain Ayn Rand book, that's here.