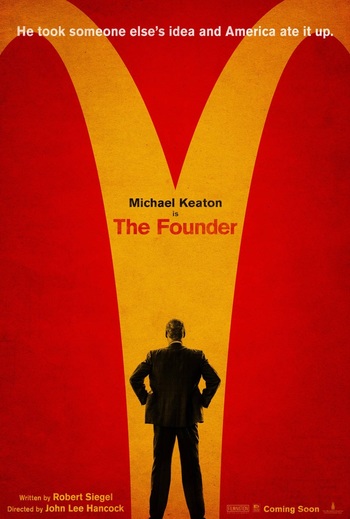 Founder's, keepers.
Ray Kroc: A glorious name, "McDonald's." I had to have it.
Richard "Dick" McDonald: You don't "have it."
Ray Kroc: ...you sure about that?
Advertisement:

The Founder is a 2016 biopic starring Michael Keaton as Ray Kroc, the alleged founder of McDonald's.

At the age of 52, Ray Kroc is an over-the-hill milkshake machine salesman. That is, until he learns of a small burger restaurant in Southern California called "McDonald's," which has ordered an unusually high number of mixers. Run by brothers Dick (Nick Offerman) and Mac (John Carroll Lynch), Ray is quickly captivated by their revolutionary method of food production, utilizing an assembly line to prepare meals in seconds rather than minutes. At his insistence, the restaurant begins to franchise and soon becomes one of the most recognized brands in the world.

Unfortunately in doing so, Kroc begins to run roughshod over the McDonalds brothers' wishes with increasing ruthlessness until he forcibly squeezes them out to take the brand name for himself.