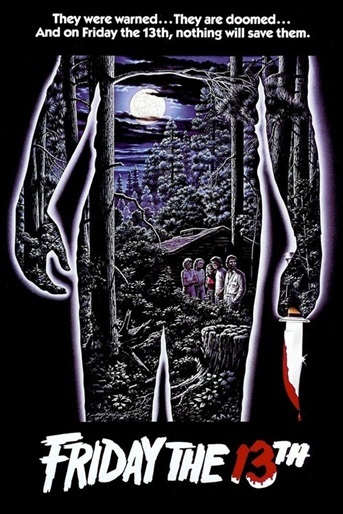 "Did you know that a young boy drowned? The year before those two others were killed?"
Advertisement:

The first film in the Friday the 13th series, and the Trope Codifier for Slasher Movie genre. Released in 1980.

Camp Crystal Lake has fallen on hard times. After several deaths in The '50s and the sabotage of two other reopening attempts, the children's camp has remained an abandoned relic of the past. Steve Christy, the son of the camp's previous owners, plans another reopening and works hard to realize it. On the 13th of June, two weeks before the opening, the counselors Steve hired to run the camp arrive to help him.

But someone else shows up as well — someone with murderous intent...

"These tropes have a death curse":

Look what you did to him.

Look what you DID TO HIIIM!

Look what you did to him.

Look what you DID TO HIIIM!