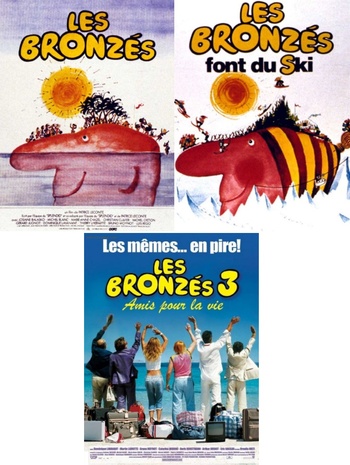 French Fried Vacation (Les Bronzés in French, literally translated as "The tanned ones") is a cult 1978 French vacation comedy film directed by Patrice Leconte. It spawned a trilogy.

The film satirizes life at holiday resorts, and features a group of various French people going to Ivory Coast with the Club Med. It was made by the theatre troupe Le Splendid', which included Michel Blanc, Marie-Anne Chazel, Gérard Jugnot, Josiane Balasko, Thierry Lhermitte, Christian Clavier and Bruno Moynot. It is based on a play they wrote and created, Amours, Coquillages et Crustacés. Serge Gainsbourg's song "Sea, sex and sun" is used in the opening. The film has achieved cult status in France, where it sold 2.2 million tickets during its initial theatrical release.

A sequel was released in 1979, French Fried Vacation 2 (Les Bronzés font du ski, literally translated as "The tanned ones go skying") featuring most of the same characters going to Val-d'Isère, a French winter sports resort in the Alps. While it attracted less people in theaters (1.5 million tickets sold), its popularity managed to surpass that of the first film, due to its memorable slapstick gags, constant reruns on French TV and winter sports resorts never fading out of popularity in France. And also very possibly by contrast with the more sex-related humor and nudity of the first film, making the sequel much more suitable for a wider audience.

A second sequel came out in 2006, French Fried Vacation 3 (Les Bronzés 3: Amis pour la vie, literally translated as "The tanned ones 3: Friends for life"), reuniting the now much older cast in Sardinia.

See also Santa Claus Is a Stinker, the other cult slapstick stage play and film the Splendid' troupe was famous for, and their comedy film from the following year, Gramps Is in the Resistance.